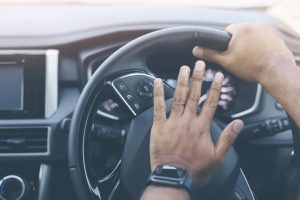 If you have any type of commute, I’m sure you’ve seen it.  One driver cuts off another, and the drivers begin waving at each other – well, waiving with one finger.  Or maybe it’s a cautious driver in the left lane who is being pursued so closely by the vehicle behind them that they appear to be towing it.  Have you found yourself shaking your head and thinking, it wasn’t this bad before the pandemic, right?  You’re not alone in thinking this, and now, some new data suggests you may be right.

Of course, road rage and aggressive driving have been an issue since long before the Covid struck. However, some experts, studies, and local law enforcement officials point to an uptick in aggressive driving and road rage incidents following the onset of the pandemic. It’s possible that underlying stress, isolation and trauma from grief during the pandemic are bleeding into everyday life, according to psychology professor Ryan Martin.  Martin, who studies road rage, told the LA Times, “People are under pressure. They are under stress and angry already about a lot of things, and driving is a perfectly designed situation to cause anger. People are heading someplace. It’s easy to feel like their goals are being blocked. It’s high stress and anxiety provoking.”

In the past year, an average of 42 people nationwide have been shot in road rage shootings each month — double the monthly average for the previous four years — according to a recent report from Everytown for Gun Safety, a nonprofit that advocates for gun violence prevention. In 2021, someone in the US has been killed or injured by gun violence in a road rage incident every 18 hours, on average, according to the study.

Across the country, traffic fatalities were up 5% in 2020, and police officers issued nearly 28,500 tickets for drivers speeding over 100 mph, almost double the 2019 total.  Those wide-open highways while many worked from home clearly enticed some drivers to flex their sport mode.  But now traffic is getting back to normal, and people need to readjust to maneuvering in heavy traffic.  Cautious driving skills are like that French you learned in high school – use it or lose it.  Practicing safe driving skills such as using a turn signal may have seemed unnecessary when you were the only car in sight on three lanes of I376, but these skills are now crucial to sharing your intentions with the thousands of other drivers sharing the road with you.

Compassion is also a factor in driving. CHP Officer Ramondo Alexander told the LA Times, “It’s all about perception. A motorist may say, ‘He cut me off.’ But maybe you were just in that other motorist’s blind spot.”

Personally, I’m seeing the cost of damage done to vehicles in all types of accidents increase about 30%.  Some of this is due to parts costing more because of the attached technology and sensors, but also because of the supply chain problems we are seeing everywhere else.  The cost of labor has increased, there is a shortage of some parts, and demands on garages have increased along with the greater number of accidents.  Higher average speeds have impacted the mount of damage done, and even medical costs have risen.

In addition, people are using their cars – and even learning to use their cars in different ways.  It has only been in the past few years that Uber and Lyft drivers have multiplied, and many more people are employing their own cars for delivery jobs like Door Dash and GoPuff.  On the younger side of drivers,  fewer are learning skills in school-offered drivers ed courses.  On the other end of the spectrum, drivers are keeping their cars later into life, and older drivers have slower reaction times.

Road rage is a complicated issue, but there is a simple way to be a part of the solution.  Drive with caution.  Use your turn signals to alert other drivers to your intentions, and always look an extra time when merging or changing lanes.  And when another driver isn’t so courteous, and you feel like giving that extra special wave, count to ten and remember that everyone is adjusting to this new normal.